Why not a "Bharat Ratna" for Kasab ?

So, why the hue and cry for the killers of Rajiv and that too by Karunanidhi and a bunch of hoodlums comprising of mis-guided students, electorally defeated caste chieftains such as Ramdoss and Thirumavalavan ?

A mute question here : The 17 other policemen who were killed along with Rajiv Gandhi, were they not Tamil enough ?

So who rejected the mercy petition in the first place ? Smt.Pratibha Patil ( if the name is not familiar, she is the President of the Republic of India ).

Why did she reject ? Because the Union Cabinet rejected the mercy petition and hence advised her thus to do so.

Why did the Cabinet reject the mercy petition ? Because the Governor of Tamil Nadu recommended so.

Why did the Governor recommend thus ? Because the State govt of Tamil Nadu advised thus.

So, who was the head of the TN govt then who did this recommendation ? Shri. Karunanidhi, the then Chief Minister of Tamil Nadu in the year 2000.

So why does Karunanidhi back the mercy petition now in 2011 ? Probably this is ‘Paguththarivu’ or rationalism.

But some ‘rational’ questions remain.

Why does Karunanidhi not talk to Pratibha directly on this ? Is is he who backed her Presidential candidature first and in fact took pride in bringing forth a woman for that position. 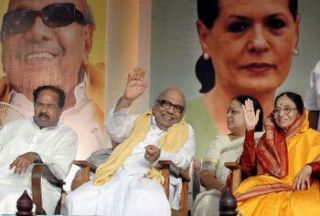 Also, who are participating in the protests ? Law breaking ‘law’less students who aspire to become ‘lawyers’. How do they protest ? By climbing on trains and staging ‘rasta-roko’. Here we see pictures of ‘lawyers’ climbing the gates of the high court in Madurai Tamil Nadu. Probably this is how lawyers ‘stand-up’ for justice to prevail .(Note that these people had not come out to protest for Anna Hazare.)

And immediately some innocent students / young people commit suicide by self-immolation. And people who self-immolate are invariably from the lower income group who have nothing but idealism in their minds and who are fired by speeches that they keep hearing. Sengodi, a teen-age student immolated herself for the cause of the 3 prisoners.

Now, how does a suicide help in this cause ? In case the three prisoners’ life sentences are commuted, what happens to the parents of the girl who self immolated ? Interestingly, no relative of the pro-LTTE leaders commit such acts.

How does a suicide bomber like Kasab justify to be kept alive at state expense ? In any case he had come on a mission to kill and be killed.

Hence it follows that once the date of hanging of Kasab approaches, there could be people from section of the population who would argue for commuting his sentence.

We have heard of ‘Arjuna’ awardees languishing in poverty in India. But Kasab and Afzal Guru are being fed and taken care of at our cost.

Therefore, instead of waiting for long, let us confer ‘Bharat Ratna’ on Kasab and officially take care of him for the rest of his life. That would be a great tribute to the Indians who were killed in the events of 26/Nov/2008.

Posted by Amaruvi's Aphorisms on August 30, 2011 in English Posts, Writers

There was this comment of ‘headless chickens’ by ambassador Ronen Sen about the Indian Parliamentarians for which he was reprimanded. What is being seen now makes the comment true in letter and spirit. Not a word or act of leadership is seen in this govt.

On day one the spokesperson of the Congress calls Anna a liar and while the govt tries to backtrack on the comment.

On day one, ministers prostrate before Baba Ramdev at the airport. On day three he becomes a crook and on day four he is arrested. No explanation what so ever.

On day one Anna is a Gandhian, On day two he is a liar and on day three he is called for the meetings of the Jan Lokpal and on day ten, he is not to be respected and will be called a liar again.

And you have the (in)famous Digvijay who would connect the ‘Vande Mararam’ to RSS and hence proclaim that Anna has the backing of the RSS. Even if true, so what ?

Next comes the accusation that the US is behind this protest ,soon to be backtracked, yet again.

No body of substance and matter in the govt seems to speak at all.

Sibal and Chidambaram, who at other times are at their vocal best, are nowhere to be seen while the crisis has been allowed to precipitate.

And as usual, the PM does not seem to exist.

A protestor and his team, with ideological moorings that are no doubt correct, has been made a super hero and the whole nation and its governance are being held to ransom. No doubt corruption has reached its heights but let the Parliament function and pass laws. Make your MPs accept the ‘Jan’ Lok Pal and ask them to pass it in the Parliament.

Whether the Parliament consists of crooks or bandits, it represents the people of the country.

This very same middle class that is protesting now does not seem to vote in elections while opting to watch IPL and other tamashas.

What happens next when a 10,000 strong crowd assembles in Delhi and goes on a protest emanding independence for Kashmir or a separate country called Tamil nadu ( now that Karuna and team are jobless, they could as well team-up with the vagabonds like Thiruma and Ramadoss of PMK ) ? Would the govt (in)act thus ?

The great destroyer P.Chidambaram ( be it finance or home ) had famously said about Arundati Roy’s seditious speech that even inaction was action. So is the govt following the Chidambaram Doctrine again ?

A Jayalalitha would have handled this better while the highly erudite Dr.Singh, often been accused of waiting for orders from the high command, really seems to make the above accusation true by his (in)action.

It is a pity that there are no statesmen seen in the govt while there are only some men who make statements and quickly backtrack.

Seems the chickens await the mother hen from the US!

Posted by Amaruvi's Aphorisms on August 23, 2011 in English Posts, Writers

Thank you Congress for the banana republic !

Fantastic laurels to the nation !

Again, thank you for the favour done to the nation !

And thanks for what, did you know ?

It is for this comment of the US on democracy in India.

Victoria Nuland, from the US State Dept, said “we count on India to exercise appropriate democratic restraint in the way it deals with peaceful protest” adding, “We support the right of peaceful, non-violent protests around the world.”

The classic case of India being treated as a banana republic based out of Africa.

And this comment is based on India’s proposed handling of Anna Hazare’s fast. And you kept up to the remark as well.

A nation whose President prides himself on Gandhian values and Martin Luther King’s philosophy, has chosen to ‘expect’ India to adhere to democratic handling of a peaceful protest – what a fall India has had to face beause of you, Congress !

How many more lows do you want for India in your insatiable hunger for power ?

You have appointed a President who has had questionable integrity yet pontificates on corruption.

You have a PM who is on “silent mode” for any call and is answerable only to the 2G – SoniaG and RahulG.

You have the power centers ( the 2Gs) always in ‘out of coverage area’.

You have the most incorrigible spokespersons in the lines of Manish Tiwari who vomits that he is told to.

And Digvijay Singh attributes any organ dysfunction of his to the RSS.

The buffoons who masquarade as ministers in the lines of:
Kapil Sibal – the classical zero loss theoritician
Chidambaram – the eternal destroyer, be it finance or home

And the lacklustre national day speeches by the PM and the President.

And the wisdom with which you allowed Hurriyat separatists to organize protests in Delhi but not Anna Hazare who is not a separatist.

And finally for making me nostalgic about Indira Gandhi by imposing a near emergency.

Great going and all the best for further lows for the nation !

Posted by Amaruvi's Aphorisms on August 17, 2011 in English Posts, Writers