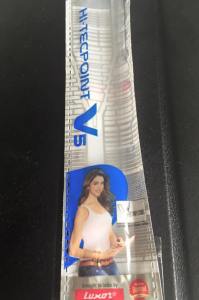 This scantily clad lady appears on the cover of a pen refill that school children use. I searched through my remaining grey cells just to relate the lady with the refill.

Does the body clinging and figure hugging dress have any relation to the refill ? I thought. Does the lady use this refill? Probably. She could be an actress and uses this particular pen brand to sign her cheques.

But why should she wear such a body clinging dress and sign a cheque? Does that hold any relevance that my brain is not able to process ? I thought. Or was it like Shruthi Hasan inaugurating a jewelry store in Singapore recently ? Shruthi is known for what she does not wear rather than what she wears. ‘Why invite her for opening a jewelry store?’ is an expensive question that I cannot answer. Similarly there should have been some un-explained reasons for having the disruptively clad woman on the refill of a pen that school children use.

What if the pen is used by a school girl? What is the message that we seek to send her other than saying ‘If you use this pen, you could become someone like the lady on the cover and dress suggestively’. Would that be the idea behind the model?

Is not Luxor, the pen maker, promoting voyeurism ? Why don’t the feminists and left liberal writers take upon themselves the onerous task of removing this ad ?

Is this not a cause worth giving up the Sahitya Academy Award for ?

Am I asking for the moon ?