Bereft of natural resources, Singapore has to depend on the world for its existence. That being the case, the country needs to be run like a company to be profitable and stay afloat. Therefore, Singapore makes money from all its inland transactions. Money generated thus, after the necessary welfare expenditure, has to grow to meet the needs of a future Singapore. Hence, Singapore grows its investments abroad.

Singapore invests its excess abroad through two Sovereign Wealth Funds – Temasek Holdings and Government Investment Corporation(GIC). These two companies invest the surplus money that Singapore has in other companies – both Singaporean and foreign. This results in capital appreciation and long-term returns by way of dividends.

Temasek and GIC have two unique approaches. These two funds hold a stake in most of the government and private companies in Singapore who in turn have stakes in companies abroad. The two funds also directly invest in foreign companies and stock markets.

Take an example. Temasek holds a stake in SingTel, the biggest telecom operator in Singapore. SingTel, in turn, holds 40% stake in AirTel of India. AirTel, in turn, has investments in South Africa and Nigeria in addition to substantial telecom operations in India. So, as India’s economy grows, AirTel grows, and as a result, SingTel grows which results in Temasek reaping profits.

In case SingTel needs funds for further investment in AirTel, it borrows from DBS Bank, another state-owned bank in Singapore. And Temasek holds a stake in DBS as well. So, it is a matter of perpetual investment where money moves from one state-owned firm to another, but reaping profit all the way. India provides a fertile ground for such an income to these state-owned companies of Singapore.

Recently, India mandated foreign banks to have subsidiaries in India if they wanted to enjoy the government securities business; earlier they were operating as branches of their overseas operations. While some banks didn’t take this offer, DBS and Standard Chartered have lapped this up and have set up subsidiary operations in India. What they gain is, even more reach into the Indian mainland and business opportunities in consumer lending and eventually entry into corporate banking space. And the sweet-spot is the millions of dollars in Indian government securities. Is there any more sweet spot? Yes. DBS India and Standard Chartered India would be wholly owned by DBS Singapore and Standard Chartered. Temasek and GIC have holdings in DBS and Standard Chartered, thus helping maintain a stable and prosperous Singapore. And that is its gain.

Temasek and GIC have further interests in India- health care and housing. GIC has invested S$100mn in Vasan Eye Care, an eye care operator in India. The resonating is very straightforward. India, because of its growing middle class, is expected to be the diabetes capital of the world. Hence, the wealthy middle class is expected to be affected by Diabetic Retinopathy in the next ten years. And Vasan Eye Care, with an increased regional presence in the southern India, is expected to reap the benefit of eye treatment. This much analysis is done by Singapore’s state sovereign funds prior to investing in India.

Lapping up the opportunity in luxury housing for the emerging middle class in India, Temasek has entered into a joint venture with India’s leading builder DLF Ltd, to develop such housing projects in New Delhi. This is a long term plan and is likely to continue for the next 10 years. It has also invested $1 bn , as of 2Q 2015 in assets such as Sun Pharma, Glenmark, Crompton Greaves and Oberoi Realty. During 2014-2015, Temasek invested $1 bn in 10 different trade transactions in Global Health, Intas Pharmaceuticals, Snapdeal and data analytics firm Manthan. Temasek’s older portfolio includes Godrej Consumer Products, Bajaj Corp, ACC and Adani Ports.

What is more, Temasek has two offices in India – Chennai and Mumbai-employs 22 investment professionals who do the investment analysis and deal making. Out of $226 bn in AUM, Temasek’s India portion alone is $10 bn and that is growing. Temasek’s India head Promeet Ghosh expects this investment to grow in the FMCG, Telecom and Housing areas in India. Ravi Lambah, Temasek’s co-head for India, Africa and West Asia says, “When we started investing outside Singapore, we played for economic growth. So, first we went to China and then gradually moved to India. Initially, we did not have enough resources, so we started with banks, as they are seen as proxy for economic growth.”

Some might say that Temasek is an investment company and not a Sovereign Wealth Fund. In 2015, Temasek contributed $3 bn by way of its gains towards Singapore’s budget. That should answer this doubt.

With $31 billion of foreign capital inflows, India has surpassed China and the US to take the pole position in attracting largest FDI in the first half of 2015, a report in The Financial Times of London says. Out of this, $31 bn, Singapore is the second largest investor. 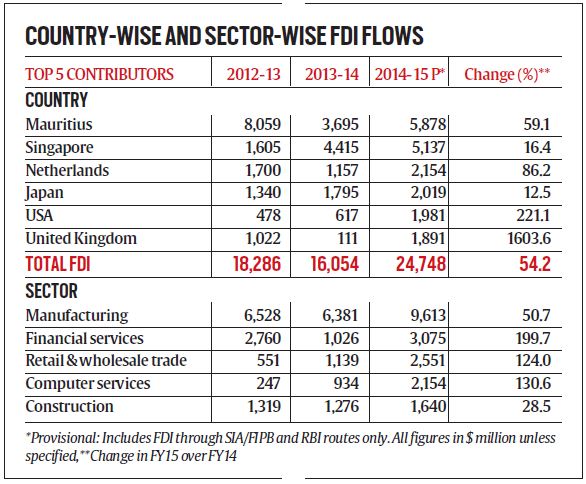 No only the state-owned SWFs but individual companies from Singapore also work in India. Singapore has developed its water treatment technologies, in association with Israel – another water-starved nation- and is an expert in water management. Now it exports its water management skills to other countries to earn valuable foreign exchange. 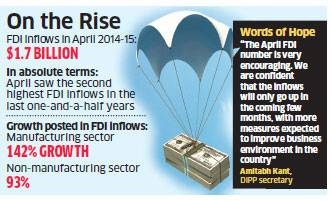 Singapore Airlines has a 49-51 JV with Tata Sons for Vistara Airlines, hoping to cash in on India’s domestic air traffic as well as traffic with South East Asia. Needless to say, Temasek has a stake in Singapore Airlines.

In 2013, Modi government in Gujarat awarded Singapore’s Hyflux a USD 420m water desalination project as part of a 30-year contract.

Surbana and Jurong Consultants of Singapore is involved in the master plan development of Amravati, the new capital city of Andhra Pradesh. The city is expected to be 50 times bigger than Singapore itself which opens up a whole lot of investment opportunities for Singaporean construction companies. Singapore Ascendas’s Ltd constructs many IT parks in India.

Sembcorp, a Singapore company, has a 49-51 JV with India’s Gayatri Projects to develop a $1.9 bn coal-fired thermal power plant in Krishnapatnam of Andhra Pradesh. Sembcorp has a 25-year power purchase agreement with the AP government. Temasek holds 49% stake in Sembcorp.

Singapore has been a bigtime customer for ISRO.

Gujarat has two SMART City projects under the Indian PM’s 100 Smart City projects. Singapore’s BCA is involved in the two smart city projects as well. The past relationship with Gujarat in water resources works helps Singaporean companies get construction contracts.

Besides getting Amravati, Singapore has got the contracts for constructing Ahmedabad and Jaipur airports. Jodhpur and Udaipur are getting the Singaporean advisory services to develop their tourism thus translating into surplus for Temasek and GIC, the custodians of Singaporean’s wealth.

The Singapore Brand has a lot of goodwill in India. Due to the immaculate execution and design standards, Singaporean companies offer a lot of value for money and are preferred by the various state governments in India.

Ten years ago, Singapore withdrew from a consortium to bid for New Delhi’s international airport. That was an ill-advised decision, for Singapore would have certainly made its mark if it would have built a Changi-like airport in New Delhi. Probably bureaucratic hurdles and difficulties in doing business in the then India made Singapore withdraw. In any case, that was a lost opportunity to showcase the Singapore brand in airport-building.

During the current visit, PM Modi conducted an investor conference in Marina Bay Sands that had 100s of CEOs in attention where he outlined the relaxations that he has brought in for investment in India. These directly translate into millions of dollars of investment into India which in turn is helping the Singapore economy.

One point PM Modi stressed was India’s part in keeping the sea lanes, from Africa to Singapore, safe which ensures the safe movement of oil to Singapore. The role of Oil in Singapore’s GDP composition  needs no mention.

Singapore recently joined the BRICS Bank spearheaded by China and India, much to the consternation of the US and western powers. And by doing so, Singapore has ensured that it gets a greater share in the BRICS bank funded projects in the BRICS countries. The century being an Asian one, it is only logical that Singapore joined the bank.

Singapore remains the largest investor in India and that is a mutually beneficial relationship. Over 6000 Indian companies have their operations in Singapore thus providing greater economic cooperation between the two countries. This also provides wider cultural exchanges between the two nations, thanks to the huge Singaporean human resource talent that is bilingual – Tamil & English, Mandarin & English. Singapore is a gateway for trade with China as well. Singapore’s huge Mandarin speaking, highly literate workforce are of immense help for Indian companies to expand in the east.

Lee Kuan Yew has mentioned this in his book: What is so unique about Singaporean work ethic? How is that seen in the world? For that, you need to go the United Nations. For any protocol related clarification or any clarification on procedures for conducting international meetings, many countries take the final word from the Singapore team. They are so given to perfection and meticulous planning that they can hardly go wrong.

And this augurs well for PM Modi’s ‘Look East’ policy. He is travelling in the correct direction and speed to use Singapore as the spring board to success in South East Asia, for India has huge stakes in the South China sea situation. ONGC Videsh has oil drilling rights in that area.

Having Singapore as a strategic partner in conducting international business, the design of mega smart cities, public infrastructure works, ports, water treatment and management is only natural for India to do and PM Modi has been quick to understand and leverage Singapore’s expertise in these areas. Additionally, this is a mutually beneficial relationship while Singapore gets to utilise its skill for the betterment of the world and also gets to grow its reserves, India gets specialised skills from a genuinely skilled and interested friend, Singapore.

Modi’s part in this:

Bureaucrats who have been used to being a hurdle in liberalising the country are giving way to enabling business. Indira Gandhi’s socialistic streak takes time to subside and is slowly giving way to a business-friendly bureaucracy, with the technology and management educated Indians taking up senior civil services positions. With an enabler like Modi, the four listed above should be achieved in due course.

More on what Modi has done to unshackle the legendary Indian bureaucracy, in subsequent articles.