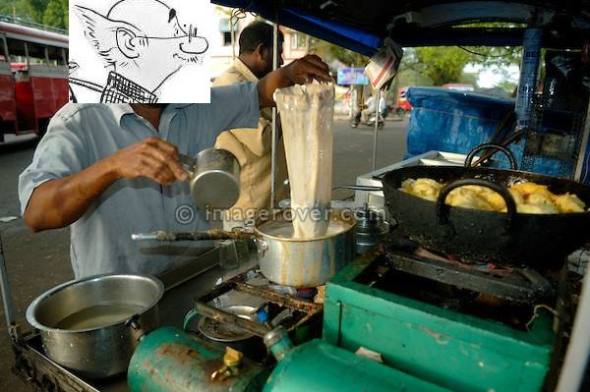 Yes Sir, I am the Tea boy speaking. Hello Mr.Mani Shankar Aiyer, do you hear me ?

Not able to hear me ? Probably true. Your phone would not be having any signal at 10, Janpath.

Let me come to the point straight away. Sir, I am very angry with you. Yes, for your comment on the tea boy.

How come you compare a tea boy with Modi ? You might not know about tea boys because you were educated in Doon School, St.Stephens and then joined the IFS. Later you became a minister as well.

You know something, I know all these schools and colleges. That is because I have sold tea in front of all these schools. No, not for the elite people like you but for the gardener, peon, carpenter, driver and other such stupid being that are cursed to work in those schools.

Coming back to the tea boy Sir. See, actually, you might not know about the tea making process because you would have only had English Breakfast Tea with Bacon, Scrambled Eggs and what not. Actually I have only tea for breakfast. Even my father has that only.

Actually Sir, this tea boy business is not correct. You should have called Modi a Cow Boy. BJP anyways wants to save the cows, right ? So he should be the cow boy. No, not play boy Sir. That is your leader Sir, who usually plays with the Colombian girl friend, you see.

Sir, you know something ? How come you compare Modi with a tea boy ? Can he make tea like I do ? I can make 5 glasses of tea in 2 minutes? Can he do it ? He is only capable of campaigning for elections, running an efficient government, increasing productivity, raising the GDP of his state and welcoming new car companies to his state. He is not capable of making Tea Sir. That needs great skills and that only your leader can make. He does not have to do what Modi is doing by being Chief Minister right ?

Sir, Modi, the idiotic Chief Minister, can only conduct ‘Swagat Online’ programs where people come to him to solve their problems. He conducts video conference with the district officials and solves them. He is capable of only that. How can he make Tea ?

Actually he goes to every village during Vijayadasami – the day of learning – and asks families to send their girl children to school. This he does every year. The foolish chief minister thinks that by doing this he will make them happy. Actually if he stays in their huts and drinks porridge like your leader, he will work wonders. And you are asking him to make tea ? He does not have the capacity to make tea sir.

You now something Sir ? That guy Modi can only bring power supply to his state. He can only make his state power surplus. He can only make people get 24×7 thee phase power. Can he make tea ? He does not have that skill sir. That needs special skills learnt from St.Stephens and Doon School.

That guy Modi has implemented a simple and stupid scheme Sir. It is called ‘Chiranjeevi Yojana’. The private hospitals are paid Rs 2000 for ensuring the safe child delivery for below poverty level mothers in villages. And that has reduced the infant mortality rate in his state. And some stupid organizations such as United Nations have given some idiotic awards to him. How stupid ? Your Congress have eradicated poverty instantly when your Montek Singh Aluvalia declared that you just need Rs 32 for a day to live in India. This guy Modi doesn’t understand all these. He can’t make Tea Sir. He is just fit to be Chief Minister, that is all.

There is another stupid scheme Sir. It is called ‘Mathru Vandhana’ – Saluations to the mother. This gives fee gynecologial treatment to poor women. And the government subsidises this. What a fool he is making out of poor doctors Sir. Would your Congress government do any such stupid act ? He is so foolish that he can only do these things and hence cannot make Tea Sir.

Sir, When the whole of India had attracted an investment of USD 69 billion in the year 2006-2007, Gujarat alone had accounted for an investment of USD 17.8 billion – that is 25.5% of the total investment made in India has been made in Gujarat. When India’s GDP was 9%, that of the state of Gujarat has been 13 %.. How dare this guy Modi produce such results ? How come a state’s growth surpass that of the country ? That is why I said he is not fit for being a tea boy.

You know this Sir, The Rajiv Gandhi Foundation of Sonia Gandhi – they have an index – The Economic Freedom Index. And they have given the best governed state award to Gujarat even as early as 2005. I say this again, Sir. This guy Modi is fit to get these kinds of awards only. He cannot make Tea.

And there are these global foolish organizations – The Wall Street Journal and The Sinapore Economic Board – they had given the Asian Innovation Award to the Chiranjeevi Scheme in 2006. Stupid organizations confer stupid awards to stupid people like Modi. I tell you again, this guy Modi can only get these awards. He cannot make tea.

And you know what ? Gujarat , like Singapore, does not have corruption. See, how can a corruption free Chief Minister make Tea ?

So, don’t rely on elections to choose the Prime Minister, Sir. If your leader stands in election, this guy Modi will win easily because what he speaks people understand. But your leader speaks like ‘Indians are made of energy’, ‘Indians have politics in their pant pockets’ etc. In my village, the ladies don’t wear pants. They wear saris. So they will not vote for your leader Rahul Baba.

So, I suggest a way out Sir, Mr.Mani Shankar Aiyer. Please conduct a competition in a stadium. Invite all international tea companies and big hotels that make good tea. Ask Modi and Rahul to make tea side by side. See who finishes first. Definitely Rahul will have finished making Tea first. Then make him Prime Minister. How is my idea, Sirji ?

Also Sir, when I was standing in front of Doon School and St.Stephens’ college selling tea, I had overheard some English lessons. So please pardon my English, Sir.

4 thoughts on “When Modi failed to make Tea !”