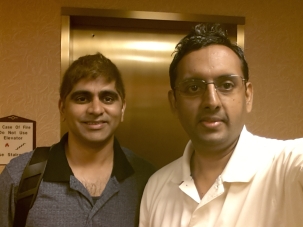 He came into my life quite early on. And when he came, he brought a little girl as well. Well, he too was as old as she was. They both were the same age as that of me. We were all 6 years old then.

That was a rather sunny day when the van screeched to a halt and some people popped out. The tall and slender Mr.Jagannathan brought with him his little son Dhas ( Dhasaradhy, for the un-initiated ). And along came the other little girl Priya, both from Vadalur.

From then on Dhas became a part of my being at school. What began at age 6 continued until age 17. There were many classes in which we both were routinely asked to be ‘outside of’. In case I was the only one standing outside, Dhas would soon accompany me just to continue our conversation inside the class that brought us out.

Our journey continued in Jawahar School, Neyveli until we were separated by college. And then we lost touch for many years until Facebook came into our lives.

But somehow the different oceans separated us – some of them being the Atlantic, the Pacific and the Indian kind.

However much nature might have conspired to separate us, the good lord Delta Airlines ensured that I reached Dallas and there came the same little boy that I met in my primary one.

Yes, it is indeed unbelievable that I met Dhas after 24 years. He drove all the way from Denver, a matter of 800 miles, just to meet me.

12 hours was definitely not enough for us to cover what happened in 24 years. So had to cover 2 years for every hour. With us was Mani, the multi-tasker who thinks about sleep as something that needs to be abhorred and keeps running races while not working for the Fed. He too joined us ( I had met him a year earlier in Singapore after a matter of 23 years ). He left in the morning and that created a small void in me.

And when Dhas left for home later in the afternoon, I couldn’t help feel the lump in my throat.

Would it need another 24 years for us to meet again ? Not sure.

Lightning appears in a flash. However the effect lingers on for a while even after it is gone.