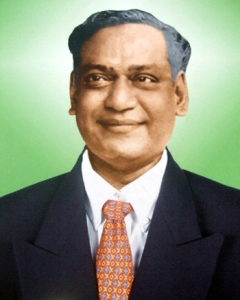 Shri.Yegneswaran, a Mining Engineer from Banaras Hindu University, took over the reins of Neyveli Lignite in 1972 and served until 1980. A dedicated engineer first and a manager next, he oversaw Neyveli when it was undergoing troubled times.

Yegneswaran enjoyed enormous clout with the central government. But that did not translate into funds for the corporation. He took it upon himself to bring the corporation from a loss making unit whose sustainability was being questioned, to a profit making one in record time, thus proving that Public Sector units could still be turned around if the person at the helm had the necessary inclination and intent.

There was a time when the corporation was on the verge of  bankruptcy. He needed operating capital to run the company for some time so that its viability, even for a short term, could be assessed. For this, he lobbied heavily with the MPs and the Mines Ministry and got Rs 120 crore sanctioned. 120 crore is a gargantuan amount today too. But to get that from the cash strapped central government in the 70s was, by itself, a miracle. Yegneswaran did just that. He performed a miracle.

Yegneswaran was a very clever leader. He understood early on that ,without the central government’s tacit support, he couldn’t achieve what he wanted for Neyveli. He liaised with the then Steel and Mines Minister Mohan Kumaramangalam and expanded the capacity of Mine I. He was also instrumental in getting clearances for Mine II. In his quest for excellence, he ensured that he visited the US to see first hand how the bucket wheel excavators of the German manufacturer Krupp Industries worked in Peabody Coal Mines in the US. US Embassy cables mention that American companies should canvass the Neyveli team into buying American equipment. However, Yegneswaran went ahead and placed orders with Krupp with finances from the German lending arm KFW.

Mine I expansion resulted in increased power generation  in Neyveli due to which agriculture improved in the state. The state should have capitalised on the strength of Neyveli Lignite Corporation and set up more Thermal Power Stations in other places in the state. State apathy resulted in Tamil Nadu not utilising the intellectual capital in NLC while states like Gujarat, Rajasthan and Uttar Pradesh gained. Yegneswaran wanted TN to better utilise NLC’s capabilities but to now avail.

A man of very simple needs, Yegneswaran once drove my Dad home in his car when they had to work on a week-end to complete a report to the central government. My Dad was many layers lesser in hierarchy than the Chairman.

One could see Yegneswaran strolling in the verandah of his office at around 8 AM in the morning. He again strolled at 8 PM thinking of the works to be done the next day.

Employees of Neyveli Lignite recall with gratitude, the strong foundation that Yagneswaran laid that is still seeing Neyveli through.

Recently an auditorium was opened in Neyveli in his name.

3 thoughts on “Yegneswaran – the guardian of Neyveli”