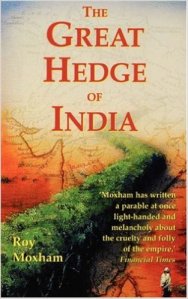 In 1995, an Englishman Roy Moxham, retires from work, visits a used-book store in London, chances on a book written 100 years ago in India by a disgruntled British officer, and then makes history. He comes across a huge hedge, a wall built across India that is even longer than the Great Wall of China, by the British colonial government to collect tax on, of all items, salt, to enrich the lives of the English officers and their government at the cost of innocent Indians.

The author then spends all his fortune, travelling in India, trying to locate the hedge and, in the process, tries to atone the sins of his forefathers – the then British colonial government. The result is a fine piece of investigative work that brings to light the most abominable piece of history that has long since been forgotten so much so that people have refused to believe that such a hedge had indeed existed.

Some of the salient features of the hedge –It extended from Orissa to Kashmir and had poisonous reptiles let inside so that people wouldn’t dare to go cross it. At one point it was guarded by 12,000 soldiers. The chief architect of the hedge, A.O.Hume, later founded the Indian National Congress to fight for the people of India.

We get to see the heartless colonial government, in full throttle, trying to extricate what is left of the poverty and famine stricken India of the 1800s. What follows is a detailed account of Roy Maxhom’s tireless efforts in trying to chronicle one of the greatest shames of the British empire.

The conscience keeper, Roy, succeeds in bringing back to light one of the darkest periods of British history in India.

A must read for every Indian.