Former Australian diplomat Walter Crocker is the author of ‘Nehru: A Contemporary’s Estimate’. He had written this soon after Panditji’s demise. Though most of the details are known to us, I felt the author has gone overboard with his treatment of the invasion of Goa. 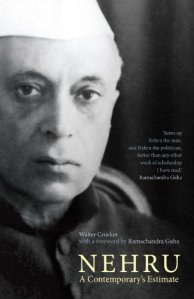 k is a sincere attempt at painting a balanced view, though at times I felt that the author was in awe of Panditji’s personality. Probably anybody who had worked with Panditji would have been struck down by the magnetic personality that latter oozed.
The book doesn’t deal with the two important things in detail – Kashmir and China. I didn’t understand why the Australian diplomat didn’t consider these two issues worth his while to write in detail while he had taken considerable efforts to paint the invasion of Goa in bad light.

I didn’t understand the rationale behind such a promising introduction by Ramchandra Guha.

The book’s language is convoluted and it smacks of the usual western arrogance in liberal doses. Probably that was how diplomats wrote then. Though rich in data, I didn’t find this book as enchanting as the the one by Judith Brown.