Prof.Julius Lipner, former Professor of Hinduism and Comparative Religions at Cambridge University dwelt on the above topics and kept the audience spell bound with his knowledge of the Mahabharatha, Sri Bashyam and Vedanta.

Quoting from the Mahabharatha, Prof.Lipner narrated the story of a brahmin named Kaushika who had taken a vow to speak truth at all times. Kaushika, in line with his principle, had, inadvertently, led to the massacre of some innocent folks who were fleeing from a killer. Lord Krishna recites this story to Arjuna and advises him that merely following a dharma was not sufficient, but dharma should be seen and
interpreted with reference to context. Any egoistic, steadfast and bland adherence to dharma would spell disaster.

As Hinduism was a dharmic religion, any interpretation of the dharmic principles, without reference to the context and times, would not be useful and would, in fact, cause harm.

He quoted the famous German philosopher Imanuel Kant’s ‘Lying to the murderer at door’ thus : “..if you have by a lie prevented someone just now bent on murder from committing the deed, then you are legally accountable for all the consequences
that might arise from it. But, if you have kept strictly to the truth, then public justice can hold nothing against you,whatever the unforeseen consequences might be. It is still possible that, after you have honestly answered “yes” to the murderer’s question as to whether his enemy is at home, the latter has nevertheless gone out unnoticed, so that he would not meet the murderer and the deed would not be done..” and further explained that such a dogmatic adherence to truth would spell doom if truth was not exercised in context. 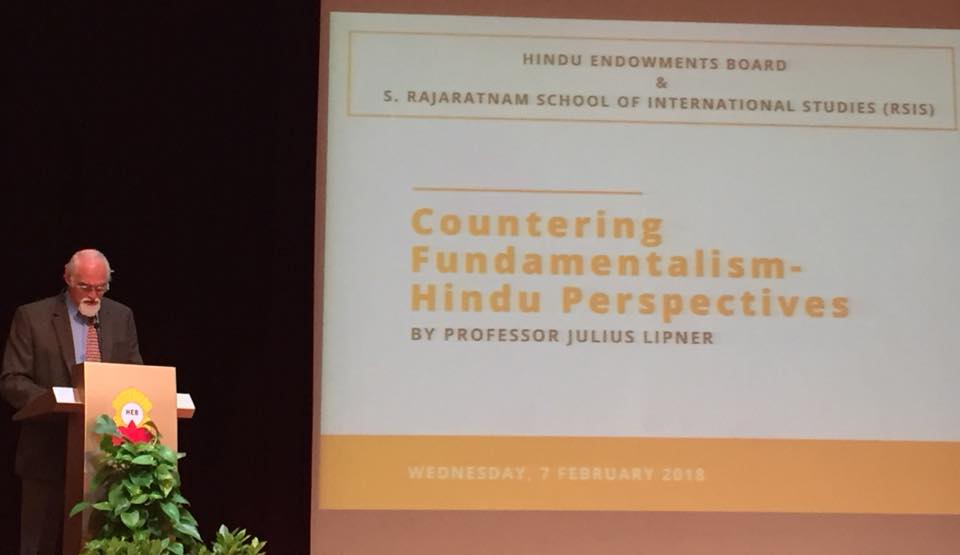 Prof.Lipner then went ahead and expounded the different ‘dharmas’ – stree dharma, aapath dharma, jaati dharma etc. Drawing on Sita’s following Rama to the forest, the prof said that the practice of Sita following Rama to the forest, though could be construed a strict adherence to the stree-dharma, would not be practical to implement in the current times. Convention and Dharma should not be confused, the Professor said.

While Christianity, Judaism and Islam could be compared to a single-trunk tree, Hinduism could only be compared to a multi-trunked banyan tree ( such as the 1000 year tree in Kolkatta). The inference here was that Hinduism was not built on any one singular belief or book, but on poly-morphic structures built on the common thread of dharma.

Describing how the word ‘fundamentalism’ came into being, Prof.Lipner narrated the movement of 1910-15 when the Bible Institute of Los Angeles published 12 small books that contained what was then known as ‘The Fundamentals’ – belief in virgin birth, belief in the mirales of Jesus et al and how the Bible had to be interpretted literally and not subjectively and certainly not with reference to any context. What was contained in the Bible was supposed to be sacrosanct and hence beyond question and inquiry. Thus originated the therm ‘fundamentalism’, we came to know.

However, with Hinduism, this has never been the case, as there is no one particular way to read the Vedas or to interpret the sacred texts. As there is no one book that serves as the epicenter of Hinduism, there is nothing ‘fundamental’ to adhere to and not deviate from, and, therefore, by design, the religion lacks fundamentalist tendencies.

Prof.Lipner later narrated a funny story of a meeting between a palaeontologist and a christian theologian. When the former had cornered the latter with ‘How could you claim that the world was created in 4000 BC when the dinosaurs, whose fossils I study, are at least a million years old?’ the theologian had supposedly replied that God had created earth with the fossils intact. This, the professor said, was fundamentalism in Christianity and that was not a trait of Hinduism.

Later the professor narrated a writing by Prof.Linda Woodhead on a commune of evangelical women and their life in a ‘time wrap’. That served as an apt reminder for the audience that nothing is etched in stone in scriptures and that even if there are elements that are central to a religion, those should be seen in the current context and not in the context when the sacred works were compiled.

Prof.Lipner concluded his speech with the reminder that the dharmic practice in Hinduism should not lead to majoritarian tyranny and that minorities should feel secure in a hindu majority rule. This, he attributed, to the central theme of dharma that has been the connecting thread of Hinduism all these thousands of years.

This was followed by a Q & A session. I had asked about ‘Akasath patitam Thoyam’ – rain from the heavens fall all over the place, but eventually reach the one ocean. This is the central nature of hinduism that believes that there are many paths to salvation and one should not be dogmatic about one’s own method. My question was : How to make other religions accept this view so that head-on collisions could be avoided, between religions?’.

Surprisingly, Prof.Lipner said that Hinduism had began to accept all religions as paths to salvation only recently. Probably, the Vedas were a recent phenomenon in Hinduism, it seemed to me.

My other question was – when Hinduism, in its varied practices and in varied languages across India, espoused equality and respect for all ( I had the Alwars, Nayanmars, Purandara Dasa in mind), why were these sacred verses not part of the school curriculum? The Professor asked me to ask this question to the respective governments and that Singapore didn’t fall into that category. ( An ex-teacher who met me later explained as to what had happened in the early years when religious teaching was prevalent in Singapore and how the Govt had to step in to censure some over-zealous preachers and thereby the practice was subsequently stopped).

There were a flurry of other questions. One compared a massacre in the golden period of Islam to the massacre mentioned in the Mahabharatha ( the Kaushika episode). Another was on how ‘ekam sat. vibraha bahuta vatanti’ could be interpretted, why Ramkrishna
Mission had to apply for minority status, appeasement of the minorities etc.

A straightforward question by a student of RSIS – ‘how could Hindu fundamentalism exist at all, that even when Hindus all over the world were being ill-treated and their human rights abused, the practitioners remained a largely peaceful lot’, set the tone for a straightforward answer. The prof said that all citizens should feel equal and one group should not feel threatened by others. The answer, though not convincing, was along expected lines.

On a question whether political rhetoric in India was shaping the perception of fundamentalism in Hinduism, the Professor replied with ‘it is a yes and a no’, not willing to take sides. To another question on the downside of poly-centricity of Hinduism, the Professor rightly pointed out that that could lead to lack of cohesiveness, lack of unity and a loss of Hindu identity.

To yet another question on the need for more dialogue among faiths, the professor correctly pointed to the great debating culture that Hinduism espoused by its ‘Poorva Paksha’ based Tarka Shaastra methods.

Later, I met the professor and raised the issue of ‘Akasath patitam thoyam’ and some references to Sri Bashyam. The learned professor agreed to meet again in Singapore and discuss some aspects of Advaita and Visistaadvaita, with reference to Sri Bashyam of St.Ramanujacharya.

The event was organized by the S.Rajaratnam School of International Studies and Hindu Endowment Board, Singapore. That an event about fundamentalism and hinduism was conducted in Srinivasa Perumal Temple spoke volumes about the lack of fundamentalism in the religion.

Singapore government’s outreach programmes such as this, to promote a deeper understanding of religions and inter-faith dialogue, have been on for quite some time. The government hopes to clear misconceptions and misunderstandings between religions, inculcate a sense of mutual respect and tolerance among the followers and ensure religious harmony and cohesion in the country. In that sense, the meeting did provide food for thought to the multi-racial audience that comprised of Malays and Chinese scholars, not to mention the scores of Indians.

These were my feelings after the seminar :

Hinduism is not just English and Sanskrit. More Tamil content should be included, for without the works of Azhwars, Nayanmars and Gurus and the Shaiva / Vaishnava Mutts, the multi-faceted religion’s dimensions cannot be conveyed in their full splendour and bloom. Nammaazhwar’s notes on the universe, other Azhwar’s references to God being called by any name and worshipped in any form and similar such pointers could have added to the lustre of the seminar, if Tamil content would have been added. Devoid of  Pura Naanooru that espoused universal brotherhood and Thirukkural that had ample references to Hindu practices and Gods, any seminar on the religion can’t be considered complete. Can’t blame the professor though, for this. Hope RSIS and HEB keep this in mind for their subsequent sessions and involve scholars from these streams too.